The Public Works Department begins plowing as soon as possible after snowfall ceases to avoid plowing twice, however, this is not always possible. Starting between the hours of 2 am and 4 am snow will generally be plowed within 24 hours of the start of a snowfall. The City has ten plowing units. Each unit starts in a different area of the City. This requires approximately 10 to 12 hours, for a light to medium snowfall of 2 to 6 inches, to plow all City streets. Delays may occur in the event of equipment breakdown or extreme weather conditions. Arterial routes are plowed first and established to be an "early-plowed" route within 1/4 mile of each residence.

When the streets are covered with snow, it is almost impossible for the snowplow operator to determine the edge of the road, especially curbs. Residents are asked to stake the edge of the curb. Wood lath is available at the Parks and Public Works Department for staking. Do not use metal stakes.

Don't Park on Streets After Snowfall

The Parks and Public Works Department requests that residents do not park on City streets after a snowfall until the street has been plowed.

Throughout the winter months, State, County, and City snowplow crews will be out clearing the highways, roads and streets during and after each snowfall. Homeowners and other property owners will be clearing their driveways at the same time. Many times while this is going on, a snowplow truck will go by and fill in the end of a freshly cleared private driveway with snow from the roadway. This is not intentional, and there is a way this wintertime inconvenience can be minimized. 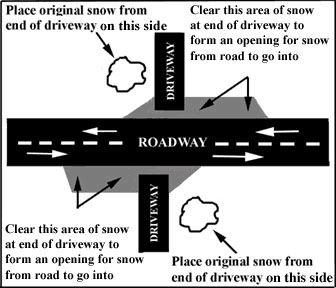 Cul-de-sac plowing will be accomplished with plows and/or front-end loaders with plows and wings. An initial pass will be made to open the cul-de-sac, pushing the snow to the center and later disbursing it throughout the cul-de-sac. If an emergency situation occurs, and your street has not been plowed, call the Hennepin County Dispatch at Phone Number: 952-258-5321.

After a major snow build-up in the boulevard, the Utilities Department will attempt to clear access to critical hydrants as personnel availability allows. Residents are encouraged to assist the City by clearing the hydrants near their property.

City Council-approved sidewalks or trails, primarily along arterials, are plowed by the City. All others are the responsibility of the property owner.

All snow and ice must be removed from public walkways within 48 hours after the precipitation causes the condition has ceased to fall. The City Ordinance requires an owner and/or the occupant of any property adjacent to a public sidewalk to keep sidewalks free from ice and snow. Because of the school district's busing changes, many of our children are now walking to school. Please keep sidewalks clean and safe!

Don't Shovel Snow into a Street or Roadway

The City of Champlin reminds property owners that it is illegal to shovel snow/ice from driveways and sidewalks onto a highway, county road, or public street. Shoveling snow/ice onto streets and highways creates unsafe driving conditions and increases the cost of snow removal.

Property owners must keep the approach to their mailboxes clear of obstructions (snow/ice) to allow safe access for delivery. If the Post Office employees are impeded in reaching a mailbox, the postmaster may withdraw delivery service.

The City will reimburse up to $50 for materials to repair/replace the mailbox damaged by the snowplows. Installation/labor is the responsibility of the property owner. If damage is caused by the weight of snow, there is no reimbursement. Homeowners must be able to prove that the plow actually hit the mailbox and caused the damage. The resident is responsible for keeping the mailbox accessible for postal delivery. For more information or to report mailbox damage, please contact the Parks and Public Works Department at 763-421-2820.

Efficient snowplowing requires that garbage and recycling carts be accessible for pickup and placed off-street to allow snow removal. Carts may have to be placed in the driveway to meet both of these requirements. It is the responsibility of the resident to see that the carts are not in the way of the snowplow and is also in a spot accessible to the garbage and recycling trucks.

Call Public Works for an inspection. Public Works repairs the area affected if the damage is caused by the plows. For more information or to report damage, please contact the Parks and Public Works Department at Phone Number: 763-421- 2820.